Excerpts from the Journal of Harth Stonebrew, Innkeeper.

A game or two of Hearthstone at the Inn can really draw a crowd! To make sure everyone can see the action, sometimes the tauren and the draenei have to stand in the back—can’t have them blocking the view. I can’t help it if some of us are a bit smaller in stature.

Speaking of getting a crowd going, just the other day there was a particularly rousing game of Hearthstone happening in the back corner of the Inn. The crowd was really cheering, hooting and hollering, but everyone was giving the table itself a particularly wide berth. An odd sight indeed!

The crowd was watching two goblins, entirely focused on their Hearthstone board—playing speed rounds using real sticks of dynamite as timers! I wasn’t particularly fond of having an open-air window in the corner of the inn, so I strongly suggested they continue their dangerous game outside. The goblins sat outside and continued their game as all the patrons peered out the windows to watch.

When a turn finally went a little too long, the poor fella on the wrong end of that stick was madder than I’d ever seen a goblin be . . . ever. Luck was apparently still on his side, though, because he came through in piece. In fact, he seemed madder about the loss than he was about his singed eyebrows! I’m sure he’ll be back tomorrow though. 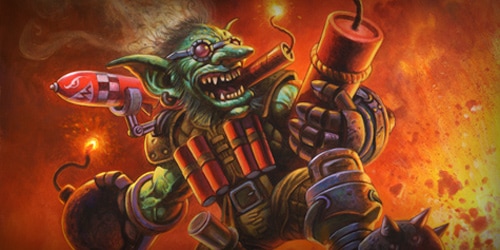