Each time we introduce a new set of cards to Hearthstone, there may be a certain subset of cards that leaves the player wondering, “What deck would I use this card in?” While some players may be actively searching for certain cards to complete their deck, or the most popular card in the current meta, other players may be left wondering when opening packs – why are some of these cards created, if they’re not immediately viable or relevant to me?

There are a lot of different types of cards added to each set, each with their own unique flavor or ability. Sometimes we implement cards that follow certain themes that contribute to the overall flavor of the set itself. For example, Naxxramas had a handful of cards with the Deathrattle keyword, because the overall theme of Naxxramas was about undead lingering within Kel’thuzad’s mighty necropolis – minions can be dangerous even after death!

Sometimes cards won’t fall within those themes – we couldn’t make every card in Naxxramas have Deathrattle, or every card in The Grand Tournament have Inspire, but that doesn’t make them useless.  They just may not make it into your current deck, or have a place in the current meta. Maybe those cards are more aimed towards players still amassing their collections, or players that are looking to create those crazy off-the-wall decks that are fun to play, but may not win a lot. Each player is different when it comes to their enjoyment of Hearthstone – it’s not always about winning!

Sometimes, those old, unused cards come back in a fresh new light with a future content update. There are a few cards that have caused a resurgence in these “old cards”, and players are dusting off some of these unused cards in their collection to concoct new strategies and a wider variety of ways to play. 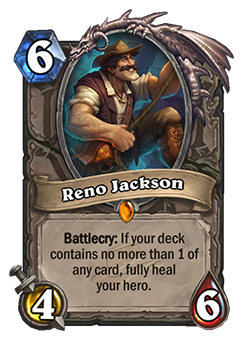 Reno Jackson is one good example of this. Not only does Reno introduce an entire new way to deck-build, but Mr. Jackson also helps pull a wider variety of cards into a player’s deck from their collected card pool. It’s not a drastic change in the value of older cards, but Reno does make utilizing a wide variety of cards in a single deck more appealing. It certainly makes sense that a legendary explorer such as Reno would be excellent at dusting off old artifacts… 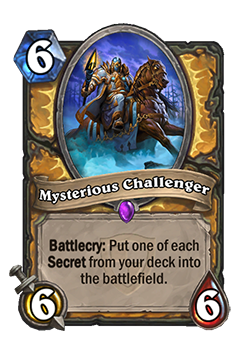 Who brought back the use of rarely utilized Paladin secrets? “None of your business.” Mysterious Challenger brought Paladin secret back into the light with his unique Battlecry. Previously, Paladin secrets were rarely utilized in most Paladin decks, but Mysterious Challenger is a good example of a card that can have an immediate impact on bringing older cards back into the fray. Sometimes having a deck full of secrets doesn’t work out if you end up drawing a lot of them in your opening hand, but sometimes the Challenger comes riding into battle and makes a big, immediate impact on the game. From there, it becomes more of a puzzle for the opponent to decide how they are going to deal with the board. 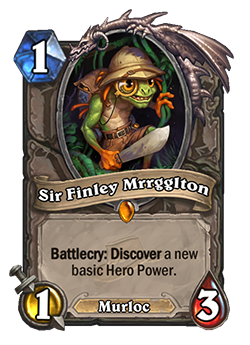 The gentlemanly scholar Sir Finley Mrrgglton has demonstrated that even changing something as simple as your Hero Power can create an entire new world of deck-building strategies that didn’t exist previously. Both Warriors and Shamans can adjust from having a more defensive or control-based playstyle to a more offensive one with the right Hero Power, while Hunters have more options of a control-based playstyle. Other classes can also benefit from different deck-building options with Finley, encouraging new cards to come out of “retirement”.

Looking at old cards in a whole new light is just one thing we want to continue doing in Hearthstone. Encouraging a wide variety of playstyles, creating cards that appeal to a wide variety of players, and creating cards that may have a resurgence of popularity in future sets keeps things interesting, and also helps to keep players thinking with the release of every piece of new content that is introduced to the game.