Join the Pre-Launch Party & Pre-Release before Forged in the Barrens Launches March 30!

It’s time to celebrate this amazing community and the launch of Forged in the Barrens on March 30 with another Pre-Launch Party! In the lead up to expansion launch will be giving away over 500 Mega Bundle codes, gifting a ton of Twitch subscriptions in Hearthstone Creator channels, and having those creators play community submitted decklists during Theorycrafting Livestreams! 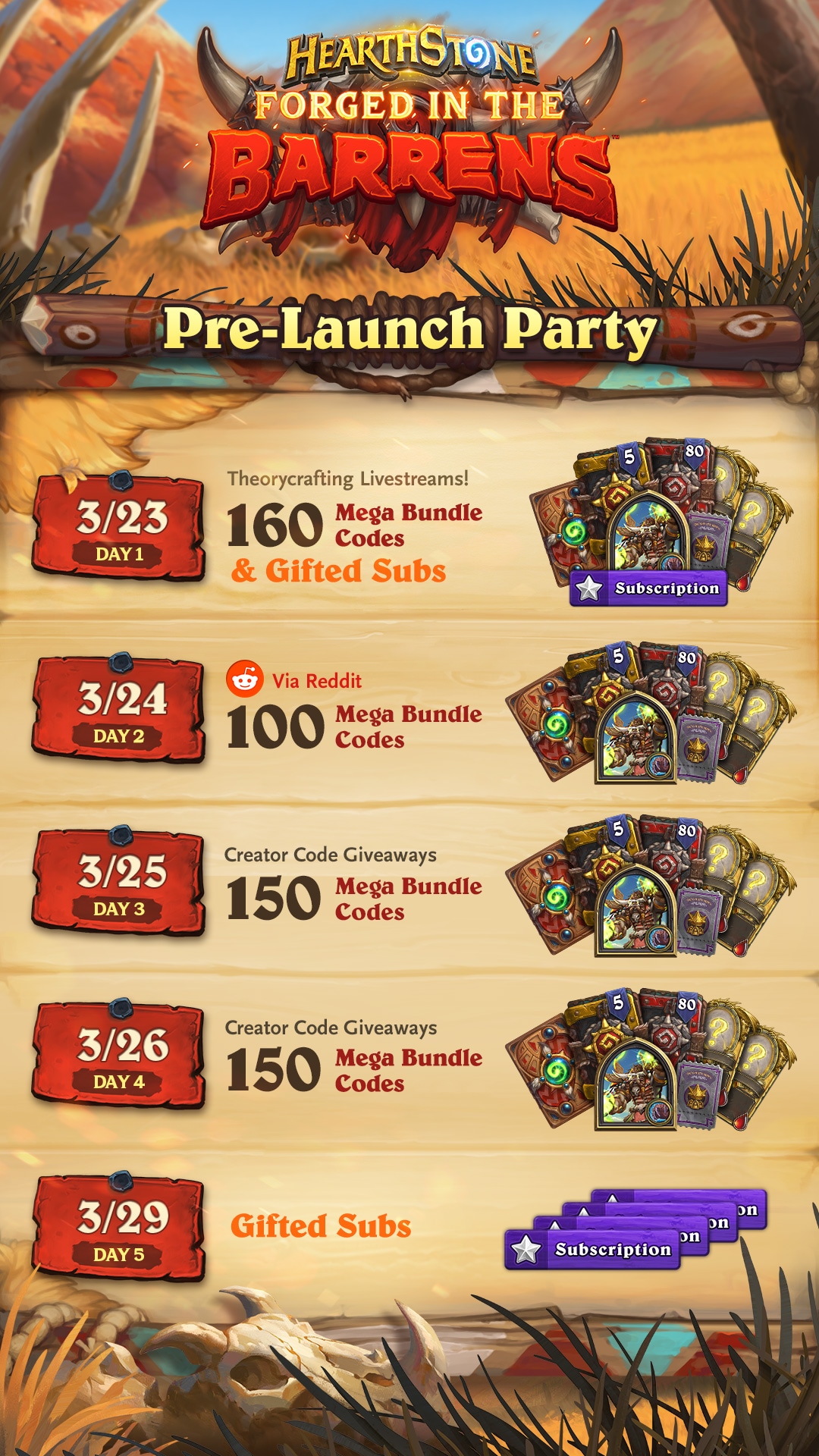 But first, mark your calendars to join RegisKillbin, Community Manager Chris Sierra, and Game Designer Liv Breeden on March 22 at 10:00 a.m. PT as they reveal the final Forged in the Barrens cards on stream at Twitch.tv/PlayHearthstone and Youtube.com/Hearthstone!

On March 22, 16 Hearthstone Creators will take to their social channels to source desklists from YOU to play during Theorycrafting Livestreams. Each creator will select one winner, with that winner earning a free Mega Bundle code!

If you’d like to submit a deck of your own just visit our website and build a Standard deck using at least 10 Forged in the Barrens cards. You can have 10 unique cards or duplicates (such as x2 of 5 cards). Then, reply to your favorite creator’s deck contest post on March 22 with your deck code and a brief description of how it works. The winning decks will be played by the creator that selected it during Theorycrafting Livestreams on March 23! 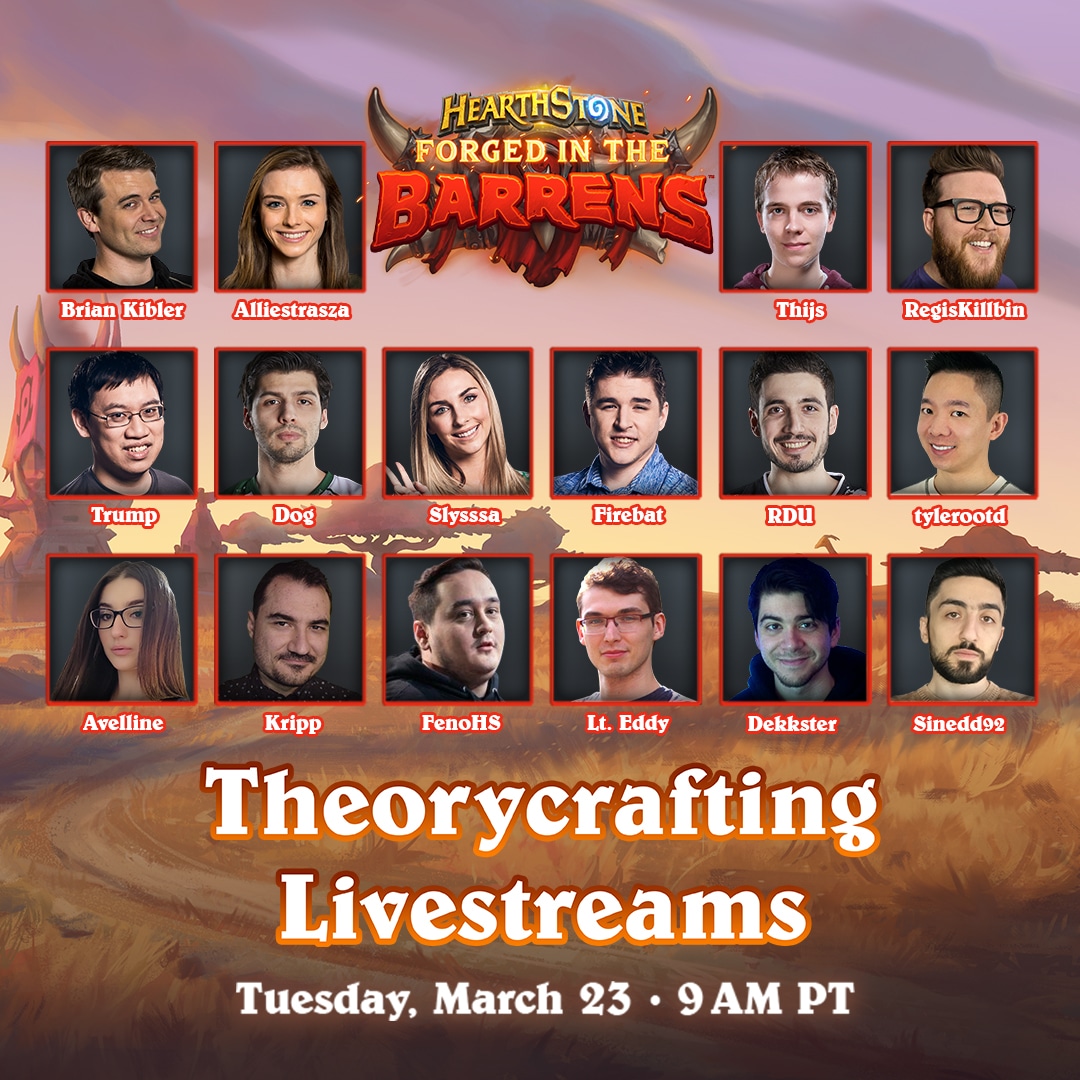 Starting at 9:00 a.m. PST on March 23, Hearthstone creators will showcase the new set and their respective contest-winning decks on their personal streaming channels, using at least 10 Forged in the Barrens cards in each deck they play. This time around we’ll be gifting 100 subs in several participating creator channels during Theorcrafting Livestreams, and each creator will give away 10 Mega Bundle codes throughout the day!

Next up, a Reddit Mega Bundle giveaway! That’s right, we hooked the Hearthstone Subreddit up with another 100 Mega Bundle codes to giveaway on Wednesday, March 24.

Then, on March 25-26, 30 different Hearthstone creators will give away 10 Mega Bundles apiece live on their personal channels! Finally, on March 27, we’re planning to drop gifted subs in a bunch of these channels, so don’t go anywhere!

Forged in the Barrens Twitch Drops 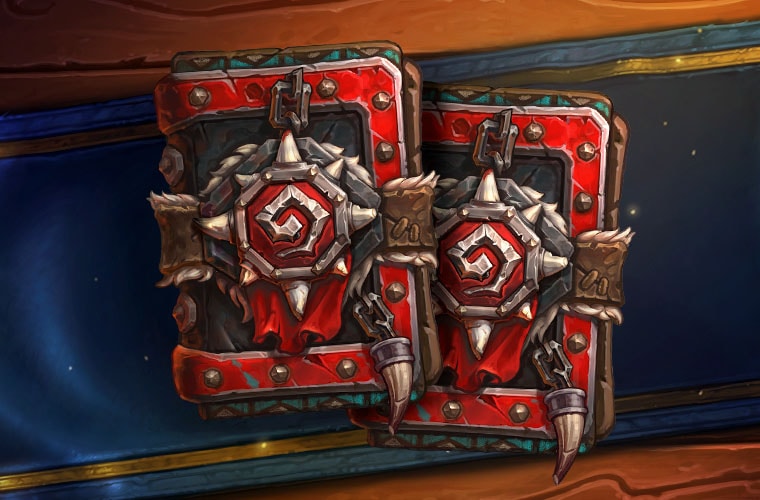 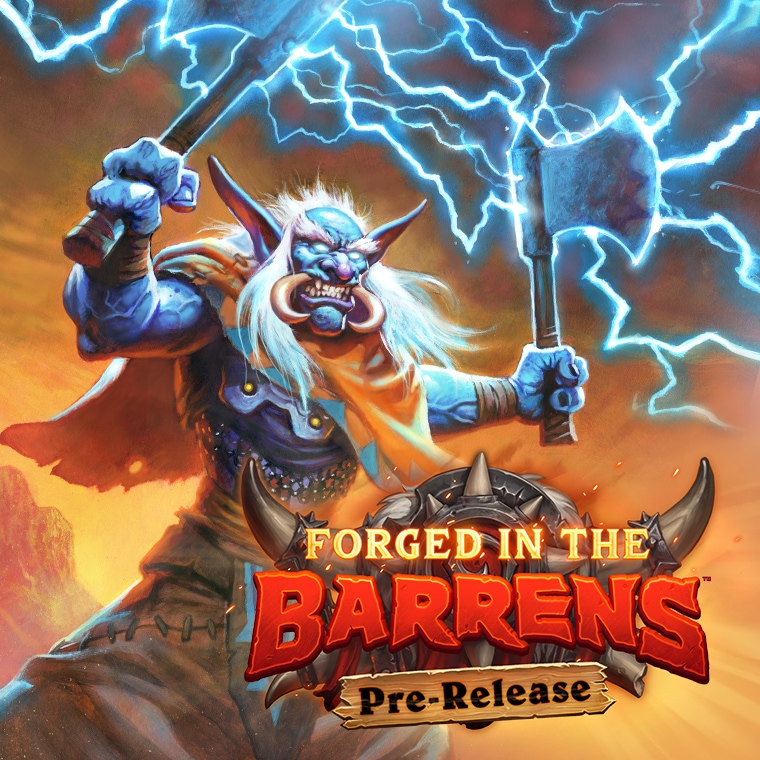 Finally, brave the Barrens during Pre-Release Weekend from March 26-29! A private pre-release Fireside Gathering will give you a chance to bust open Forged in the Barrens card packs before the expansion officially launches on March 30. In addition to opening your packs early, Pre-release will also feature Fireside Brawls that will let you play with new cards!

*UPDATED* With Forged in the Barrens Pre-Release weekend coming up we wanted to share a quick update on an issue we've discovered which affects how two new Legendary cards, Mankrik and Blademaster Samuro, are acquired.

Head over to FiresideGatherings.com to register your one-person event!

In light of the ongoing global health risks associated with in-person gatherings, we’ve canceled official Fireside Gatherings for the near future and disabled the ability to create public events.

We do, however, want individuals at home to have an opportunity to partake in the upcoming Pre-Release weekend, so we’ll be keeping private event functionality intact. Players can register their own one-person event to enjoy opening Forged in the Barrens card packs from March 26-29.

Thank you all, innkeepers and patrons, for understanding.

Private Fireside Gatherings will NOT: