The Key to the Hearthstone Arena

Last week, you may have joined us for our first ever live stream of The Arena. We hope you had just as much fun as we did! In that hour, we discussed the basics of this alternative, competitive deck-building game mode. In today’s blog, we’ll be going over some more of The Arena details in depth, and recapping some of the essentials in case you missed anything in the excitement.

What is The Arena?

The Arena is our “build-and-battle” mode where you construct a 30-card deck on the fly, and then battle it out with other Arena players. You’ll be presented with three random cards at a time, and you’ll choose one of the presented cards to go into your deck. After 30 cards have been selected, you’ll have a full deck of destruction that you’ll use to crush your opponents. The Arena really puts your deck-building knowledge to the test, and it’s just one of the many fun ways you can play Hearthstone.

How can I step into The Arena?

It’s easy to access The Arena. Each time you want to start a new Arena playthrough, you simply pay the entry fee with gold acquired from Play mode and quests, or with real money.

What can I expect inside The Arena?

Inside The Arena, your first decision is to choose the Hero that you’ll base your deck around. Three random Heroes out of the total nine are presented. Perhaps you’ll be in the mood for a bit of spell-slinging with Gul'dan the Warlock, or maybe you’d like to try smashing the competition with the brutality of Garrosh the Warrior. The choice is up to you! 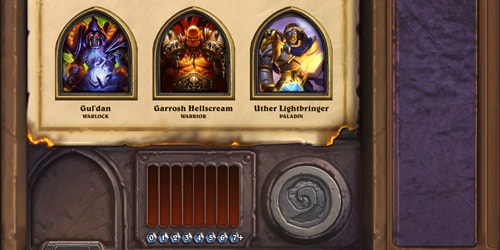 With your trusted Hero by your side, you’re ready to test your deck-building skills by selecting cards. For your first pick, three different cards will be displayed to you, and it’s your job to decide which one you want to use for your deck. Any neutral card or card specific to your class could be displayed, and it doesn’t need to already be in your collection. 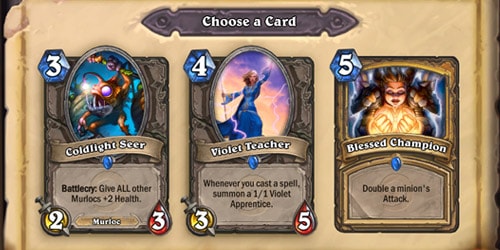 Your choices might be tough—and you can’t go back and change your cards later—so pick wisely! For example, you may have selected Uther as your Hero, and you’ll have to make a difficult decision between Coldlight Seer, Violet Teacher, or Blessed Champion. You might then decide to base your deck around that choice, or you may change your strategy halfway down the line—you never know what may come up! Don’t rush through this process—there’s no time limit. You can even stop halfway through making your choices, come back a week later, and pick back up where you left off.

Whew! You finally picked the first card of your deck and you’re feeling really good about the decision. You’ll be faced with three card choices a total of 30 times, eventually giving you a 30-card deck when all is said and done. You may have even picked up a Legendary along the way, and you can’t wait to unleash it against the competition. There’s no limit to how many of each card you can have, so if you were lucky enough to pick up five of your favorite spell card, more (arcane) power to you!

This might be your first time stepping into The Arena. Don’t be nervous! You’ll be pitted against opponents with a similar win and loss record to yours. It’s time to test your skills: Take that deck and venture into The Arena!

To the victor go the spoils!

You won your first battle (as if there was any doubt!) and you’re ready for more action. But when does the action stop? Even the most battle-hardened warrior can get tired—or, you know, has to get back to work.

Each win you accumulate will level up a key you’ll see on The Arena screen—the better your key, the better treasure it unlocks for you. Losses aren’t factored into your rewards, just wins. Rewards can be gold, Arcane Dust, Golden commons and rares, or even packs of cards! The more you win, the better your rewards will be. 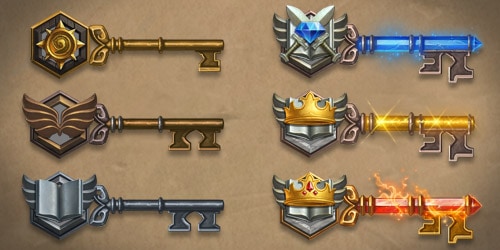 There are a couple of limits: If you win 9 times, your key will be fully upgraded to the max level: the Grand Master Key, which grants the best rewards possible. If you lose three times, that’s it for that deck, hero. You’ll receive rewards based on how much your key has been upgraded before you reached three losses. So, for example, if you earn 5 wins before you reach three losses, you’ll get better rewards than if you had had 0 wins and 3 losses. If at any time you need to take a break from dueling in The Arena, just hit the back button to come back later. The deck you made before leaving will be the deck you use until you lose 3 games or win 9 games. Fight hard! 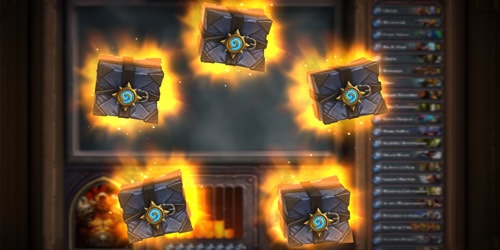 I bet you want to know what's inside.

Once you’ve finished your epic run in The Arena and claimed your rewards, you can venture back in at any time and start a new Arena challenge from scratch using gold or real money. If you were skilled enough to receive a Diamond Key or higher in The Arena, you’ll have enough gold from your rewards to immediately play it again—and undoubtedly, a few fallen foes will be eager for revenge. Once you pay the entry fee again, you’ll get to create a brand new deck from new Heroes and new card choices, and soon you’ll be a renowned deck-building machine in Hearthstone. May your opponents tremble at the mere sight of your name!

Hey wait a minute, wasn’t this called The Forge?

The Forge was the original name of The Arena. We decided to change it because many people assumed that The Forge was where you engaged in Crafting. The word “forge” invoked the imagery of creation rather than the idea you were tempering your skill (which is what we were going for), so we decided to change it to something that better captured the competitive nature—a place where you battled others.

You’ve got the hang of it now!

That’s it for The Arena basics! If you’re ready to do some serious theory crafting to get a leg up on the competition before the Hearthstone beta, come by and visit our forums or visit one of our amazing fansites!

If you missed it, check out our recording of the first ever live stream of The Arena here, featuring Hearthstone developers Ben Brode and Eric Dodds!