Building a deck can be stressful, especially if you’re left wondering “what do?” when staring at your collection. I’m Mike Donais, senior designer for Hearthstone, here with a few tips on the subject. Aside from 20 years of card-gaming under my belt, I also worked as a designer for Magic: The Gathering and the World of Warcraft trading card game. Let’s get to it!

Deck building, how does it work?

Here are a few fundamentals for building a strong deck.

The types of decks you can create are virtually endless, so it’s good to know what kind of deck you want to play before you start building. If you want a fast, aggressive (“rush”) deck, stick to efficient, high-damage minions. Include minions with Charge and spells that deal damage directly to your opponent. 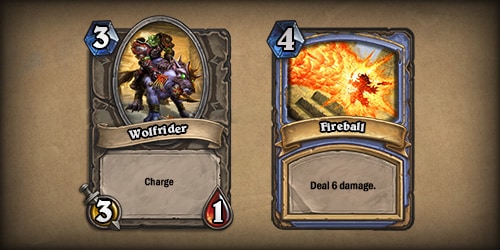 If a slow and careful “control” deck is more your style, include healing and taunt minions. The taunt minions force your opponent to attack them before they can take a swing at you, and the healing minions help restore some health you (or your other minions) might have lost. 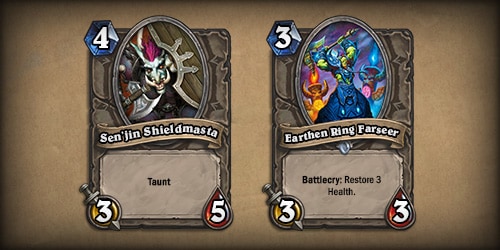 Some themes can be more complex, for example focusing around cards like Gadgetzan Auctioneer, Alarm-o-Bot, various Pirates, or Malygos. In those cases, you’ll of course want to include some fun cards that match your theme, but don’t forget to also have some strong, generally useful cards to keep you alive while your theme plays out, such as Frostbolt, Backstab, or Lightning Bolt.

If you get behind in the early game, it’s tough to get the upper hand again. Having 5–10 cards that cost 1–­2 mana and make sense to play on the first two turns can help avoid this. These are usually minions or spells that can remove your opponent's early minions. 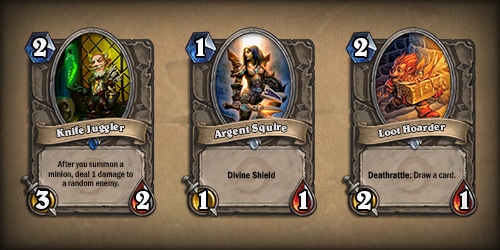 Most decks can benefit from solid late-game/higher cost cards. Even for rush-themed decks, something aggressive like Argent Commander can make sense, whereas a control deck might do well to include something like Sunwalker .

Card drawing can also be useful in the late game but remember a minion that takes 2 cards to kill is better than drawing 2 cards because if your opponent doesn’t have the cards to kill it you are way ahead. 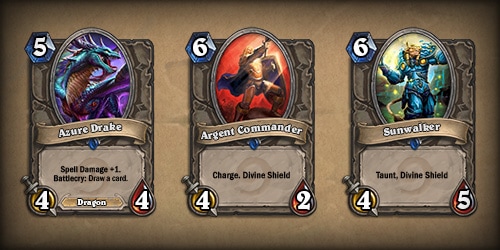 When first building decks, try including 20 or more minions. Later you might break this rule with specific spell focused decks.

5. Improve the deck over time

Remember, this is a learning process; you’re going to win some and lose some. Don't change your deck after just one game—pay attention to what cards worked out well over the course of several. Then, go back over the deck and make changes based on what you learned.

For example, if you lost to a lot of fast-paced decks, add more taunt minions and cards that cost 1–2 mana. Make sure you don't have too many expensive cards.

Or, if you run out of cards before killing your opponent, add more late-game minions.

Have patience! If you lose to a deck/specific class once, it doesn't necessarily mean you need to make a change!

If you don't play any cards on the first three turns, you’ll likely get too far behind, so make sure your starting hand has at least one 2-mana card even if it means you have to mulligan (redrawing at the start of a duel) a good 4-mana card.

First, consider a play that would spend all your mana, and then compare that with your other options. Getting big minions out early is usually the best strategy because it puts your opponent on the defensive. If your opponent doesn’t have the right card to deal with your early minions you end up with a big advantage.

Once you are more experienced you should also think about how you will spend your mana on your next turn.

3. Think twice before making a play

Before you make a play, pause and look at your whole hand to make sure you don't have a better way of dealing with the situation.

4. A clear board is a happy board

Trading one of your minions for a similar enemy minion is generally a good idea. Meaning if you have say a 3/3 minion and your opponent also has a 3/3 minion, you should attack and kill theirs with yours. By doing this, they won't be able to surprise you with a buff spell that could make that 3/3 minion a 4/4 minion.

This is also important because if they play a spell that damages all of your minions, it won't be as big of a problem.

5. Don’t play too many minions.

Each class has some way of clearing the board if there are a lot of enemy minions. Try to keep those in mind when playing more than two minions.

6. Card drawing is for late game

If you have a choice between playing a minion or drawing cards it is almost always better to play the minion first. Putting out minions puts your opponent on the defensive while drawing cards doesn’t improve your board at all. When you are out of minions then you can play your card drawing to get more.

This applies to minions like Loot Hoarder, too. On turn 2, if you have a Faerie Dragon and a Loot Hoarder you should play the Faerie Dragon first because you don’t need to draw cards yet. Having the bigger minion out is more important. 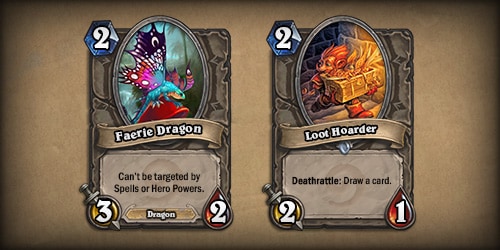 If you can kill an enemy minion by using your hero power it is a big advantage because you didn’t spend a card. However, most of the time, playing a creature from your hand will give you a bigger board presence than using your hero power. In the early game focus on getting out minions so that you control the board. In the late game you will have more mana so you can use your hero power more often.

Even the most experienced players don’t win all of their games.

This article was originally created and hosted on Kotaku. You can find the original article here.

Ready to learn more about Hearthstone? Visit the New Player Tavern for guides and discussion!