The chilling final wing of Naxxramas has been unlocked and awaits you at the pinnacle of the necropolis.  Frostwyrm Lair is now open and it seems a certain Archlich has got a bone to pick with you.

With the opening of the Frostwyrm Lair, all wings of Naxxramas are now available for players to experience. Naxxramas wings unlocked in the following order:

Frostwyrm Lair is the final wing of Naxxramas—home to Kel’Thuzad and his powerful undead frostwyrm, Sapphiron. Victory over these heat-deprived hooligans will reward you with all-new Hearthstone cards. 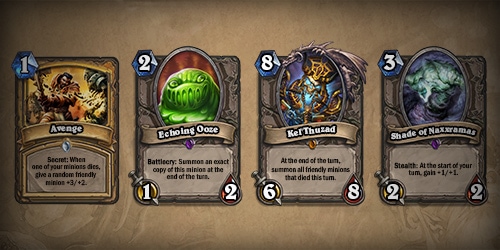 Sapphiron awaits players as soon as they step into Frostwyrm Lair, ready to put the deep freeze on anyone who would threaten his master. If you manage to avoid being chilled to the bone by this wintery wyrm, his defeat will add two copies of the Echoing Ooze card to your collection. 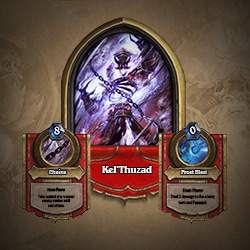 Kel’Thuzad IS ALL POWERFUL AND VERY HANDSOME! Hey! This isn’t your blog!

Ahem. Kel’Thuzad is the final boss of Naxxramas, and he eagerly awaits the opportunity to strike down all interlopers who have dared to step into his precious floating necropolis. If you thought the other bosses of Naxxramas didn’t play fair, remember—you’re in his lair now! A victory over Kel’Thuzad will reward you with two Shade of Naxxramas cards to add to your collection.

Defeating all of the bosses within Frostwyrm Lair will add the Legendary Kel’Thuzad card to your collection.

Frostwyrm Lair also features the final Class Challenge that will become available to those who have defeated the bosses on Normal Mode. Overcome this Challenge and you’ll be rewarded with a shiny new class-specific card to expand your repertoire.

For those of you seeking out a serious challenge, Heroic Frostwyrm Lair becomes available after you’ve defeated all of the bosses on Normal Mode. Heroic Mode bosses are significantly more difficult than their normal versions, and the Heroic Frostwyrm Lair bosses will freeze all that oppose them in their tracks!

Dress warm and chill out with some of the coolest bosses in Naxxramas. Venture into Frostwyrm Lair in Curse of Naxxramas: A Hearthstone Adventure today!