Greetings to all card-slingers around the world!

Some time has passed since we last sat down and pow-wowed, and in that time a lot has happened. Since launching Hearthstone®: Heroes of Warcraft™ back in March, we’ve: 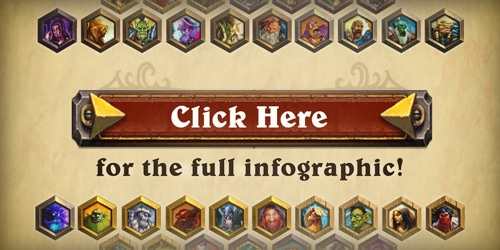 We’ve created this infographic to share some less well-known (but still important!) metrics we’ve hit together along the way. Check out just how many Hounds have been Unleashed, the number of minions turned to adorable Sheep, and other interesting statistics.

Throughout the past year, many of you have been asking about the release date for Hearthstone on Android. The team has been hard at work to bring Hearthstone to that platform, and is making great progress. We’re taking things one step at a time and we’ve got our sights set on a release for Android tablets, our next new platform, before the end of the year; we’ve just got a few more mana crystals to polish and some Angry Chickens to chase down.

We’re also close to having Hearthstone out to our iPhone and Android phone users, but it’s become clear that we need a little more time to get that version right. While we have a build up and running internally, it needs a bit more work, and we don’t feel like we’ll be ready to share it with you until early next year. It’s very important to us that the phone experience for Hearthstone is just as accessible as the tablet and PC versions. One of the biggest challenges with that is revamping the user interface so it feels intuitive and offers the same quality Hearthstone experience, but this time from the palm of your hand.

Releasing Hearthstone on iPhone and Android phones is something we’re incredibly excited about, but ultimately we’d rather take the extra time to make Hearthstone’s user interface on the phone customized to feel great for the platform, rather than a port that doesn’t take into account the limitations of a smaller screen.

As always, we can’t thank you enough for making the game what it’s become. From the never-ending Fireside Gatherings you’re hosting around the globe, to the insane victories you’re  sharing via videos and streams—and even the tough love we get at times—we’re all constantly blown away by our amazing community.

See you at BlizzCon. We can’t wait to show you what’s to come!