The Grand Tournament – The Joust!

Today, we’ll be taking a stroll past the gates of The Grand Tournament, Hearthstone’s second expansion, to explore the tournament grounds before everything really kicks off later this month.

There are many ways for a knight to prove their valor, but there’s only one true test of mounted might! An aspiring champion may face off against raging beasts in the arena or best skilled challengers in melee combat, but nothing shows off one’s heroic grandeur like mounting a noble steed and charging with a leveled lance in the ultimate chivalrous contest: the joust!

The Grand Tournament wouldn’t be complete without jousting, so you’ll certainly see some tense contests on your Hearthstone board. When a jousting card is played, a random minion is revealed from each player’s deck. The minion with the higher mana cost wins the joust, and both cards are then shuffled back into their respective decks. If the initiating player wins the joust, they get to reap the benefits! Watch jousting in action below! 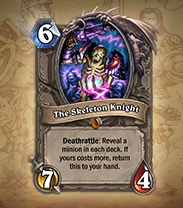 This spooky skeleton is a skilled knight who has spent his whole un-life practicing the joust! The Skeleton Knight loves the contest so much that when you win a joust, he’ll return for yet another chance at the fray. He also enjoys canned meat and pasta. 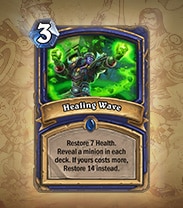 Healing Wave is a heapin’ helpin’ of healin’, all in one card. It’s widely considered better than non-healing waves because even if you wipe out, it still feels pretty good. Waaaay better than mangling wave, right? Right.