Hearthside Chat: The Art of Journey to Un'Goro

During the early stages of development for Journey to Un’Goro, the Hearthstone art team spent some time creating an initial pass at what an expedition through the primal lands of Azeroth might look like. To learn more about the visual challenges that needed to be met as Journey to Un'goro took form, we sat down with Hearthstone Concept Artists Jerry Mascho, Jomaro Kindred, and Charlene Le Scanff. 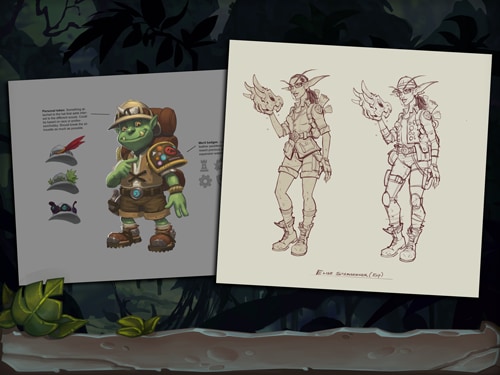 We had a great deal of fun exploring the Scout Leader outfit for Elise Starseeker! We wanted to make something that would identify her as Scout Leader but like it could/should exist in the Hearthstone Universe! We looked for unique ways to display merit badges on the Junior Explorers too, aside from the typical sash, and we ultimately decided to go with a leather shoulder pad that the scout could stitch that badge to. 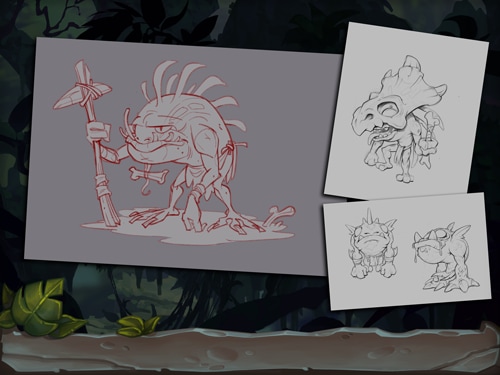 With each new expansion, we do what we call a ‘Murloc Test’ and Un’Goro was no exception. Here are a few ideas for a primal Murloc that might roam the jungles. 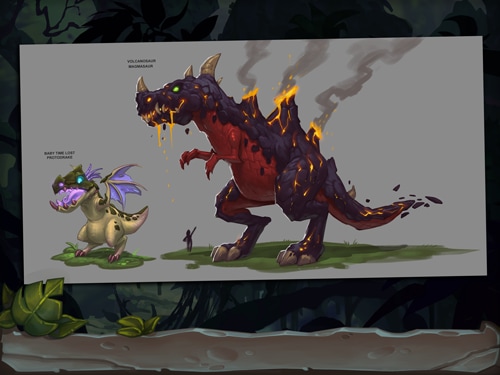 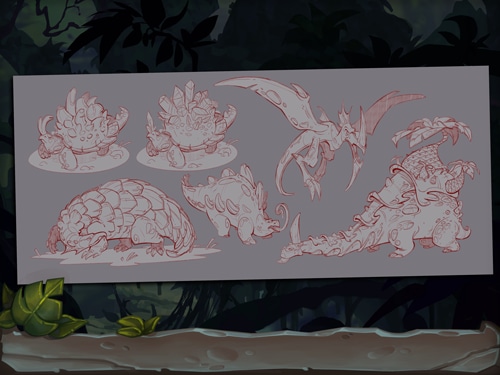 I can tell you that all the artists on the Hearthstone team were brimming with excitement when we found out about Journey to Un’Goro—‘YESSS! We get to paint BADASS DINOSAURS!'

Since we were going to a more primordial area, I thought it would be fun to pay homage to the Time-Lost Proto-Drake. I haven’t been able to catch it in World of Warcraft, but at least I could possibly have a Hearthstone card featuring it! So how do you make something that feels more menacing than a Devilsaur? You make it larger, slap huge active volcanos on its back, and make it drool molten magma, of course! 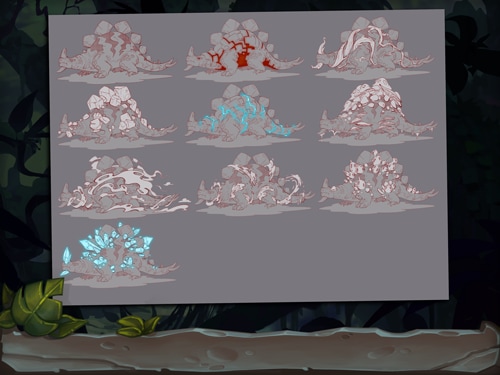 We spoke a lot about what the adaptation concept could be in Un’Goro. Basically, we wanted this capacity to be related to elementary evolution. What would these various and different transformations look like on the same dinosaur? 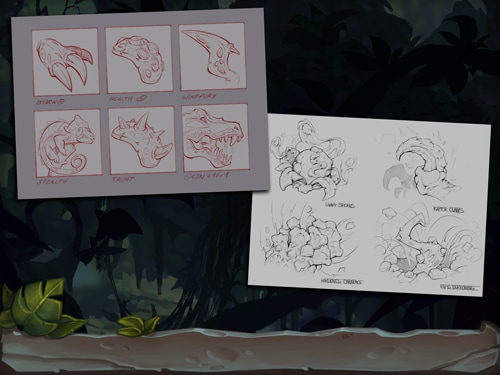 After exploring how different elements could affect our creatures, we wanted to see how to best illustrate the gameplay effects of Adapt from an anatomical point of view: carapace for increased health, wing for Windfury, and so on. 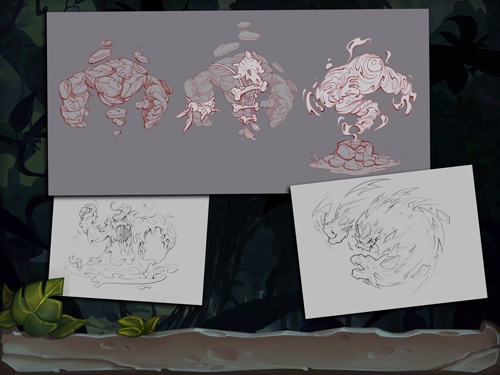 Elementals are an important part of the Un’Goro lore: you must imagine a wild land where the elements meet each other to form a brutal, powerful bestiary. Among these various elements, steam and rock seemed to be an obvious combination to explore. 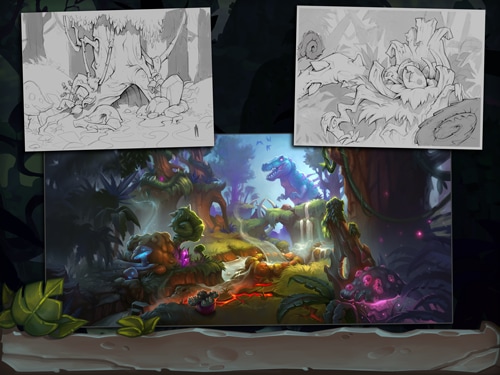 When we first started working on Journey to Un’Goro, the environments were a big part of what we could use to pull everything together and sell an epic scale for the card art. These are a few sketches that showed some ancient plants and jungle fauna to find what we wanted to portray. 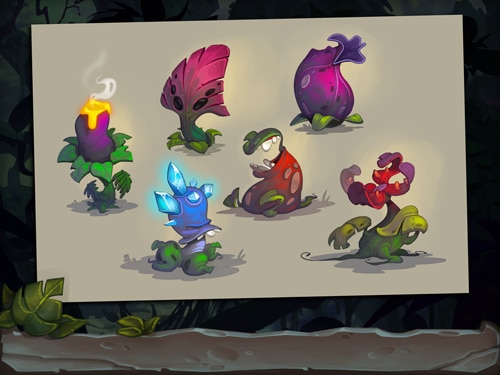 Charlene had some great ideas for the plants in Un’Goro—these really helped give the vegetation a lot of character and reinforce what this new jungle environment would look like in Hearthstone. 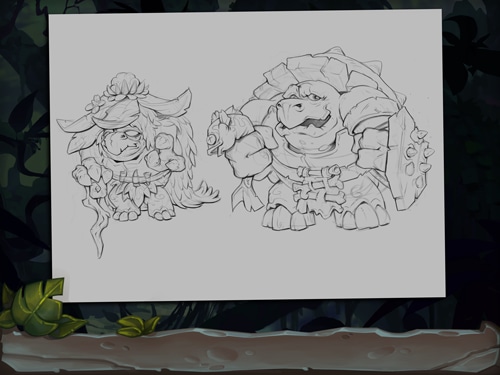 The designers wanted us to explore the idea of a tribal group and we thought it would be fun to introduce a new race based on some ancient turtle creatures. So, the Tortollans were born. This sketch shows what a shaman and brute might look like in their culture. Fish as a weapon?! They . . . aren’t very clever. 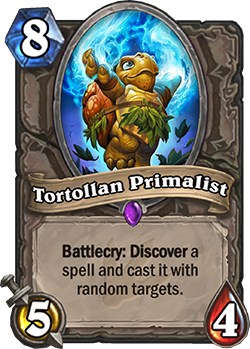 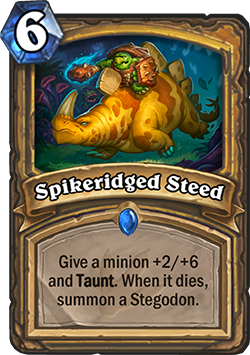 We picked these two cards because they’re great illustrations that captured the fun aspect of the new Tortollan creatures. A Tortollan riding a dinosaur into battle and a floating mystic casting a spell—so good! 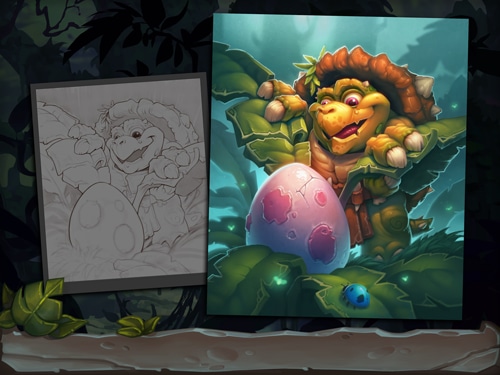 I was lucky enough to be assigned one of the Tortollans for a card art illustration. This little guy was a lot of fun to work on; here’s a look at the sketch I started with and the approved painting. 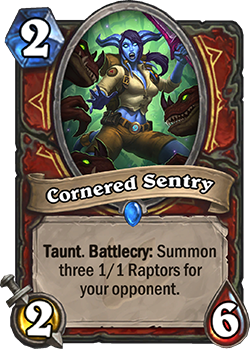 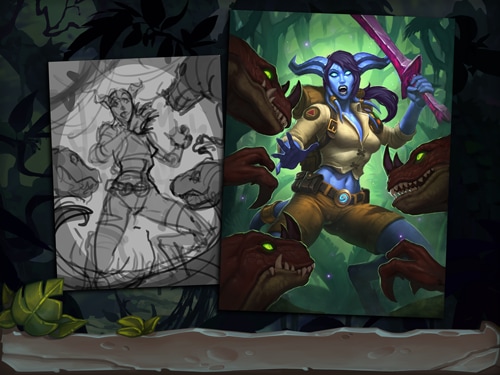 For the Cornered Sentry card art, we wanted to show the second adventurer who has traveled back in time, holding off three small raptors. This was a blast to work on. I mean, what illustrator wouldn’t love painting dinos and Draenei?!

Thanks for checking out the early concept work for Journey to Un’Goro! We hope you had as much fun getting a behind-the-scenes look as we had working on the new expansion. See you on the expedition!