Our final look into the different themes in Goblins vs Gnomes is one that might be familiar to our players: Deathrattle. While we brought more interesting Deathrattlle effects into the game with Curse of Naxxramas, Goblins vs Gnomes will feature additional Deathrattle cards that will demonstrate to players that a mechanical invention can still be useful even once it’s out of service! 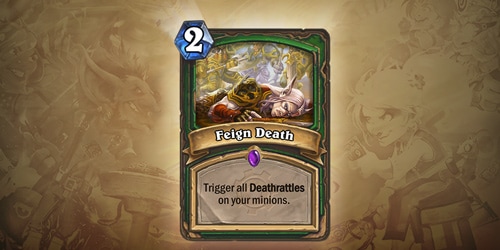 Feign Death will trigger all existing Deathrattles on your minions as if the minion died, without the glaring drawback of actually dying. Have a Nerubian Egg in play? Now you have a Nerubian Egg AND a Nerubian! Have Sneed’s Old Shredder in play? Now you have a Sneed’s Old Shredder and a random Legendary minion! The combinations are endless, and only get more interesting with Baron Rivendare in play . . . combined with Feign Death, your minions trigger their Deathrattles twice!

With all of these dangerous Deathrattle minions mulling about, it’s bound to catch the attention of certain minions who choose to follow the path of righteousness. Those who use death to their advantage may suddenly find themselves at a disadvantage when faced with the power of those sworn to the Light! As Anduin Wrynn says, “The Light shall burn you!” 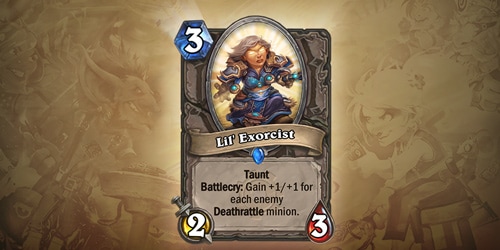 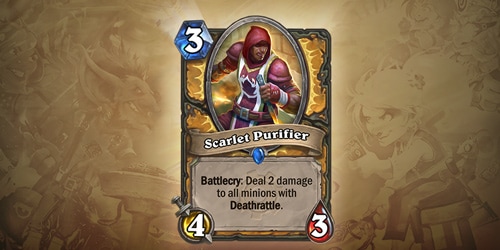 Lil’ Exorcist and Scarlet Purifier are two extremely useful minions when your opponent has a multitude of Deathrattle minions in play. Scarlet Purifier damages all minions with Deathrattle, so he’s also quite good at making Nerubian omlettes. (Because, y’know, you have to break some eggs to make . . . oh, never mind.)