Goblins vs Gnomes Cards Have Invaded the Arena!

Oh, now you’ve done it. You broke it.

I did no such thing, Gazlowe. I’ve improved it. See? The springs on the Hearthstone box are now remote operated! The wood is self-polishing! The card-shuffling mechanism is now 100% more mechanic-y!

That’s  . . . great and all, but your mech appears to be distributing Goblins vs Gnomes cards into the Arena! It’s not time yet, Toshley! Turn it off!

Ah, of course, that was merely a miscalculation. J-just give me a moment to recalibrate the distribution device.

It’s too late, you upgrade-obsessed gnome, they’ve got their hands on them already! Things are about to get very . . . interesting in the Hearthstone Arena. . . .

Thanks to a bit of meddlesome tinkering—and perhaps a little goblin-induced sabotage—all Goblins vs Gnomes cards are now available to choose from in the Arena!

You heard that right—those pesky pint-sized engineers (being an impatient bunch) have jury-rigged the Arena to give Hearthstone players a sneak peek at what’s in store when Goblins vs Gnomes officially launches next week. In doing so, they’ve calibrated things to throw all Goblins vs Gnomes cards into the Arena deck-building mix ahead of schedule. Speaking of peeking, Spectator Mode will also be online, so you’ll also be able to tune your transmitters in to watch your friends play—check out the It’s Better With Friends section of our BlizzCon Fireside Chat blog for more on how it works. 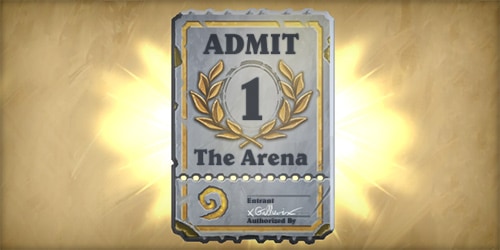 Another unexpected side-effect of this mechanical meddling: anyone who logs in to the game between December 4 and December 8 automatically gets their next new Arena run for free! It’s a zero-risk chance to see some of the new cards in action—with a high-risk chance of something going explosively awry. And if you’re already in the middle of an epic Arena run that won’t be finished before December 8, don’t worry—just make sure to log in during the pre-launch period, and you’ll be good to go.

Once the expansion officially launches starting on December 8, you’ll be able to permanently add Goblins vs Gnomes cards to your collection by purchasing packs, using dust, or earning Arena rewards—until then, it’s a great time to hop into the Arena and tinker with all the new Mechs and other devices that’ll be available for players to collect. New strategies and card choices await, so dive in today!